Get that baby a borrel!

I recently attended my first baby borrel, a party given by the parents a few months after the birth of a Flemish child. (A borrel is a drink so it's basically a party to toast the arrival of said baby.) Apparently they can range from rather modest affairs to all-out extravaganzas, much like a wedding. This one fell into the latter category.

It was held not at the family's house but at a rented hall, for reasons that became apparent once I saw how many people had been invited. There were easily a hundred family members and friends, with their children, present. Like a wedding, there was a bar serving beer, wine and soft drinks. The room was filled with long tables decorated in theme colors, and there was a table for presents.

The baby in his carriage, along with his parents, was stationed by the entrance to welcome his guests. He seemed unperturbed by all the attention. An uncle hovered nearby, ready with his camera to take pictures of everyone. After admiring the baby and congratulating the parents, guests seated themselves at the tables with other friends, co-workers and family members. 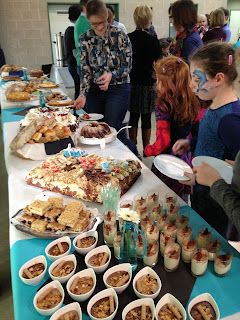 An even longer table held a stupendous array of cakes and sweets, with a couple of token trays stacked with fancy sandwiches. Hardly anyone touched the sandwiches. Like everyone else, I went straight for the cake. Fancy decorated cakes made with sponge cake and layers of buttercream and whipped cream. There were bundt cakes, different types of vlaai (a kind of pie), two kinds of chocolate mousse, tiramisu served in individual glasses, and cookies.

For the kids, there was a separate table where they could decorate mini-cupcakes and cake pops. There was a clown making balloon animals and someone else doing face painting. 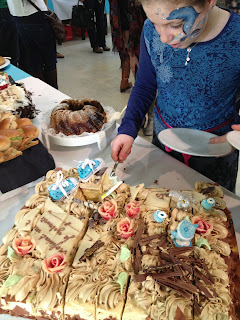 The father circulated throughout the room with a tray of little plastic shot glasses containing limoncello and a very strong local liqueur made from sour cherries--in case the wine and beer weren't enough. In the middle of the afternoon, I might add.

The baby borrel is a relatively new tradition in Flanders. The old custom was for friends and family to come to the hospital to see the baby right after the birth, or to drop by the house in the weeks following. Eventually, the constant stream of visitors got to be too much and someone had the idea to throw one big party where the new baby could be introduced to the family's wider social circle.

Where I come from, we have something called a baby shower (presumably because the mother-to-be is "showered" with gifts). It's usually held 6-8 weeks before the birth and is a more intimate affair, with only a few female relatives and close female friends in attendance. Rather than welcoming a new child, the focus is on preparing and supporting the new mother.

The Flemish, being a deeply pragmatic and cautious people, find it strange that you would have a party for a baby before the birth. After all, things can and do go wrong in the weeks leading up to the delivery, during childbirth, and even afterwards--although no one likes to think about that possibility. 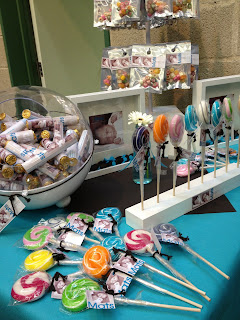 I guess Americans are just naturally optimistic. We would rather act as though everything will be fine--and in most cases, it is. The Flemish, on the other hand, would rather wait a few months and then celebrate once it's clear that everyone really is fine. And once the mother has had a chance to recover a bit and appear in public looking her best!