There's something that has confused and bothered me ever since I got here. I thought it odd that all the milk for sale in the grocery stores was sold unrefrigerated. You can store it that way for months, and once it's opened, it will keep in the fridge for weeks and weeks. I'm not sure how long it will stay "fresh" since I've yet to have one of those boxes go bad.

It doesn't go bad because it's ultra-pasteurized; the process is also called UHT, for ultra-high temperature.The milk we drink in the States is merely pasteurized and needs to be refrigerated. It will also go bad in a week or two even when keep cold. (Sometimes cream and half-and-half are ultra-pasteurized to make them last longer in the fridge.)

Personally, I'm suspicious of ultra-pasteurized milk. It tastes weird, and--Hello! Milk is supposed to go bad! It's milk. So when it doesn't need to be refrigerated, I'm thinking that it's not really milk anymore, if you know what I mean.

The thing that's really weird about this situation is that Belgium is full of dairy cows. You can't drive 10 kilometers in any direction without seeing some nice, contented cows standing around in a beautiful green pasture. There are cows right in Hasselt, within the city limits. I figured there must be a way to get real milk around here. 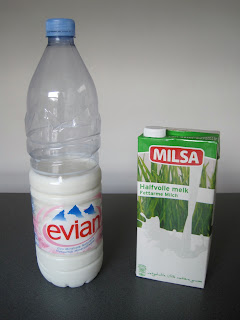 I picked up a map at the tourist information office that's labeled "Fairtradeplan" and shows the locations of various organic and fair trade businesses around town. It listed one place that sells "verse hoevemelk" not far from my boyfriend's work, and yesterday I went looking for it after dropping him off at the office.

Success! There, on a main street leading out of the city center, was a small dairy farm. I pulled into the driveway and parked between an open barn full of cows standing around in large pens with clean hay and a brick building full of what looked like modern milking equipment.

A man came out of the suburban house next door and, when I said I was looking for fresh milk, asked me if I'd brought a bottle. I hadn't, so he went back inside the house and got an empty plastic water bottle. Then we went into the brick building and he filled the bottle from a giant stainless-steel vat. It cost me 1 Euro for a liter and a half.

Now that I know how easy it is to get real milk, I'm never drinking UHT milk again! I have a friend here who says she usually goes to Holland to get fresh (normal, pasteurized) milk so I told her about the dairy farm. My Belgian boyfriend is suspicious, though. He thinks that if it can go bad, it can't be good.
Posted by Diana Goodwin at 9:40 AM