Getting married in Belgium, Part I

I got married in Belgium this summer (to a Belgian, of course.) In many ways it was just like getting married in the United States: the bride wears a fancy white dress, the groom wears a fancy suit, family and friends come together, there's a big party afterwards. But there are some surprising differences.

Perhaps the main difference is that in Belgium, everyone who gets married has to get married at city hall (stadhuis or gemeentehuis) in the city where they reside. In the United States, you can get married at city hall, in a church, in your parents' back yard, on the beach, or almost anywhere you want. As long as the officiant has the right to perform weddings in the state where the wedding takes place, the wedding is legal.

A few years ago, one of my friends in California got ordained by some Internet church so that she could perform another friend's wedding, which was outdoors at a lovely garden restaurant. I think all she had to do was fill out an online form and pay $20. When it was her turn to get married the following year, her brother did the same thing so that he could officiate at her wedding--this time at a hotel in downtown Los Angeles. All perfectly legal.

This could not happen in Belgium. For a predominantly Catholic country, Belgium takes the separation of church and state very seriously. A priest cannot perform a legal wedding. Put another way, a church wedding (or religious ceremony of any faith) is not legally recognized in Belgium. The only legal way to get married is to have a government official perform the ceremony in a government building. 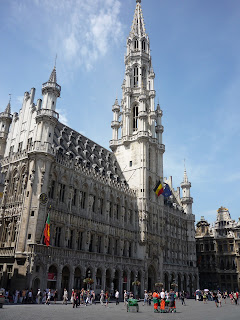 Many people choose to have a church wedding in addition to the legal wedding, but the church wedding has to take place after the one at city hall--otherwise it's considered illegal. That's right: it's illegal to get married in church unless you've already been married at city hall. Usually the couple and their guests go directly from city hall to the church, but sometimes the second wedding takes place on a different day.

It's also very unusual for the religious ceremony to take place anywhere but in church. Apparently priests don't like to leave their churches, and you just don't find the variety of "officiants" that exist in the U.S. who are available to perform weddings in other venues. You simply don't have a second wedding unless it's a church wedding. There's none of this business with writing your own vows or having theme weddings performed by Elvis or Captain Kirk.

My American family, hearing that there would be a civil ceremony preceding the religious one, said that they'd just as soon skip it and only come to the second ceremony. Where we come from, a wedding at city hall is a sterile, perfunctory affair. One pictures a bland, administrative office with fluorescent lighting and linoleum on the floor, and couples waiting outside in the hallway until their number is called.

Here in Belgium, there's a good chance that city hall is a 600-year-old late Gothic masterpiece, as is the case in Brussels (pictured above), Leuven and Bruges. As residents of Hasselt, we weren't that lucky, but our stadhuis is still quite beautiful, an eighteenth-century former mansion with an imposing brick-and-limestone facade. The room where we got married has a huge marble fireplace, dark wood paneling and brass chandeliers. 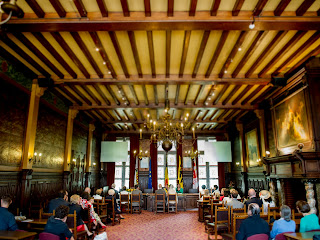 We convinced my relatives to come to city hall, assuring them that it would be worth their while. Although brief, the civil wedding had a formality that emphasized the gravity of the proceedings. The Americans in attendance were impressed by the Belgian legal code (which we'd had translated into English) stating, among other things, that the couples' place of residence shall be determined by mutual consent, and the each spouse has the right to pursue a career without the permission of the other.

At the end of the ceremony, we received a small book from the city official with our names and wedding date, the official city stamp, the full text of the marriage law, and pages with spaces to write in the names of up to fourteen children. Fourteen! That's optimistic, but then the Belgians do love children.
Posted by Unknown at 5:32 PM