Why Halloween is superfluous

Today is Halloween, that beloved American holiday celebrated with glowing jack-o-lanterns, trick-or-treating and costume parties. Houses, schools and stores are decked out in macabre decorations like spiderwebs, tombstones, skeletons and ghosts. We love it because it involves eating lots of candy, dressing up and indulging our fascination with all things scary, creepy and dangerous. 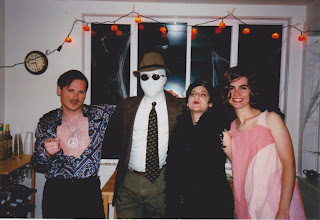 Friends at a Halloween party, ca. 1998
As an American expat living in Belgium, I've noticed a few indications of Halloween's approach, but they're feeble and half-hearted, as befitting a holiday that isn't native to this land. As with so many aspects of American culture abroad, TV shows and advertising have given Belgians an awareness of Halloween and its trappings, with the result that it's starting to make inroads here.

However, as much as I miss the all-out excess of Halloween in America, I have to admit that Halloween in Belgium just seems out of place. People my age didn't grow up with Halloween; they never went trick-or-treating or wore a homemade ghost costume to school. Many of them are parents now and make an effort at some kind of Halloween observance for the sake of their kids. But I can tell their heart isn't in it.

Maybe the reason Belgians don't do Halloween is that they don't need it. The things we love about the holiday are already part of other, traditional Belgian holidays. As kids, the thing we liked most was all the candy—and the once-yearly pass from our parents to eat as much as we wanted. Belgian children have Sinterklaas, the feast of St. Nicholas on December 6, which is as much about sugary treats (and sugar overload) as it is about presents.

Dressing up in costume? That's for Carnival, the period leading up to Lent that's celebrated with non-stop partying, drinking, festivals, and yes, crazy costumes. Even better than Halloween, Carnival lasts for days, and some of the traditions (and costumes) date back to the Middle Ages. Of course Carnival, like the version celebrated in New Orleans as Mardi Gras, is more for grown-ups, but children also get in on the fun at school and at Carnival parades especially for them.

One Belgian custom, although no longer widespread, closely resembles trick-or-treating. On Driekoningen ("Three Kings"), the feast of Epiphany on January 6, children dress up as little kings and queens and go door-to-door, singing a song and asking for treats and money. In some communities, this was also done during Carnival—but with different songs, and like the implied threat of TRICK-or-treating, the songs suggested that death would come to those who didn't give! 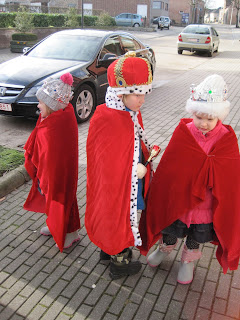 Children dressed up as Driekoningen

I don't really miss going to Halloween parties or having trick-or-treaters show up at my door. Part of being an expat is embracing a new culture, and that means learning to appreciate the things that are different. But there are a few Halloween traditions that I do miss, like carving pumpkins and eating candy corn. Making a jack-o-lantern is easy enough, and maybe I can get someone to send me some candy corn next year...

(A version of this post also appears on the website for Fans of Flanders, the new television program aimed at English-speaking expats in Belgium. I'm very honored to be one of the regular guest bloggers!)
Posted by Unknown at 8:45 AM