Today is Ash Wednesday, the start of the Christian season of Lent, a period of penitence and fasting leading up to Easter. In New Orleans, Louisiana, the day before Ash Wednesday is celebrated with Mardi Gras (“Fat Tuesday” in French)--North America's only indigenous Carnival. In our mostly Protestant country, Carnival traditions never took hold anywhere else.

Here in Catholic Belgium, Carnaval (spelled slightly differently) is part of the culture. It doesn't seem to be celebrated everywhere, but there are local Carnaval festivities scattered all over the country. The most famous ones are in Aalst (Flanders) and Binche (Wallonia). Where I live, in Limburg province, there is a long history of Carnaval traditions which are tied to the neighboring regions of Dutch Limburg and the German Rhineland. 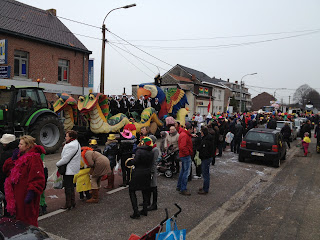 On Monday, I experienced my first Flemish Carnaval in my husband's home village. Vroenhoven is located just over the border from Maastricht, which is probably the Netherlands' most famous Carnaval city, boasting the most outrageous parties and parades. Most of the villages in the area have their own home-grown Carnaval parade, led by local organizations who elect a Prince of Carnaval every year. 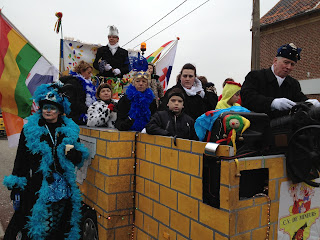 This year, the Vroenhoven stoet (“parade” in the local dialect) was organized together with the parade in Wolder, the Dutch village on the other side of the canal separating Belgium from the Netherlands. The joint parade started in one village and then made its way over the border to the other village and back again. A truly international celebration!

In America, we're used to images of scantily-clad Carnivale dancers in Rio de Janeiro, or slightly-more-covered revelers at Mardi Gras. The reality of Carnaval in Belgium couldn't be more different: Everyone is bundled up against the cold, and the most popular Carnaval accessories are big, funny hats (good for keeping your head warm), and scarves, gloves and legwarmers in traditional Carnaval colors of red, yellow and green. 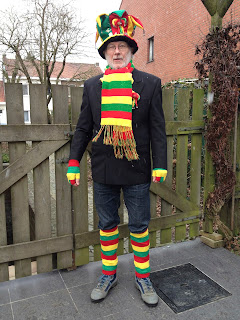 Carnaval in Vroenhoven has a distinctly rural flavor, with all the parade floats constructed on farm trailers pulled by huge tractors. Each parade float had its own theme, with costumed revelers either riding on top or walking alongside. I wasn't prepared for the shower of candy and other goodies that were thrown into the crowd, but the children standing next to me came with big shopping bags which were soon full to bursting.

My husband grew up participating in the parade, wearing a different costume every year from the time he was a wee child. Our two-year-old niece is too young yet, but I look forward to the day when she'll take her place in the annual Carnaval parade. And next year, I'll be sure to bring a big bag so that I can help her gather up the candy.