Giving thanks and eating turkey

This past Sunday was Thanksgiving here in Belgium. OK, not officially. Technically, Thanksgiving, the traditional American holiday, was last Thursday. But Thursday wasn't a holiday in Belgium (and as far as I know, Belgium doesn't celebrate Thanksgiving in the sense of a national, civic holiday of the “harvest festival” type). I know many Americans living in Belgium had their Thanksgiving dinner on Thursday evening, but for our family that just wasn't practical. 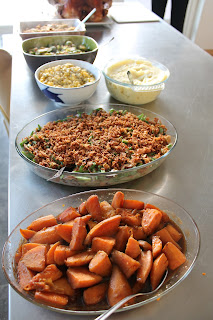 So I declared Sunday to be the day we would gather together for a meal of turkey, stuffing, gravy, cranberry sauce, mashed potatoes, candied yams and green been casserole. And, of course, pumpkin pie. The assembling of this traditional meal takes a lot more advance planning and requires a lot more preparation time in the kitchen than it did when I lived in the States.

There, during the weeks leading up to the day itself, the grocery stores are overflowing with displays of all the ingredients you need: canned pumpkin for the pie, boxes of instant stuffing, piles of sweet potatoes... and of course whole turkeys, frozen and sealed in plastic. Many elements of Thanksgiving dinner can even be bought ready-made, such as pumpkin pie and cranberry sauce.

Preparing Thanksgiving dinner in Belgium, as I discovered the first time I tried it two years ago, is not nearly as easy. First of all, it's impossible to find whole turkeys in the grocery stores a month before Christmas. In the end, my then-boyfriend's parents ordered one from their butcher, and when it arrived, freshly slaughtered, it still had a few feather quills attached to its skin. And it was huge—much bigger than any turkey I'd ever cooked before.

This year, we made sure to order a slightly less huge turkey, only 8.7 kilos (or about 15 pounds). My mother thought that sounded small for 10 people (well, nine adults and one toddler) but it turns out Belgians approach Thanksgiving dinner the way they do any festive meal: with restraint, and normal-sized portions. You can lead a horse to water, as they say, but you can't make him drink until he's about ready to throw up.

I also had to search high and low for sweet potatoes, which can be found in the bigger supermarkets with the other “exotic” produce, clearly labeled with their country of origin: USA. I still can't figure out why Belgium, which produces at least a dozen varieties of regular potatoes, hasn't caught on to the deliciousness of the sweet potato. They're really missing out. 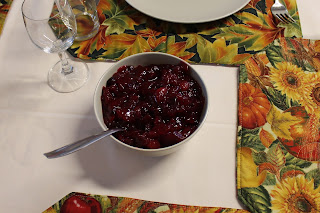 In addition to turning me into a food sleuth, having Thanksgiving in Belgium forced me to become a better cook. I couldn't find Campbell's cream of mushroom soup so I had to make green bean casserole from scratch. No ready-made cranberry sauce? Turns out, it's actually really easy to make yourself, and way more tasty. Without canned pumpkin I had to make the pie from scratch too, by first roasting and puréeing a sugar pumpkin.

In the end, I have to say that cooking Thanksgiving dinner in Belgium is becoming one of my favorite traditions. It's a way for me to enjoy the tastes of home and at the same time share them with my family here. Needless to say, they love roasted turkey and stuffing, candied yams and pumpkin pie—I mean, who doesn't? It's also a way for me to celebrate all that I have to be thankful for, here in my adopted home. A whole new family being tops on the list.

(A version of this post also appears on the website for Fans of Flanders, the new television program aimed at English-speaking expats in Belgium. I'm very honored to be one of the regular guest bloggers!)
Posted by Unknown at 1:13 PM