Who is that fat man in the red suit?

Having spent the previous ten Christmases in Los Angeles before coming to Belgium, I can say that the holiday season is much more... “Christmasy”... here. For one thing: we have winter in Belgium--albeit a rainy, gray, miserable kind of winter for the most part. Also: Christmas decorations all over town, pretty lights on every street and a Christmas tree in every Grote Markt. 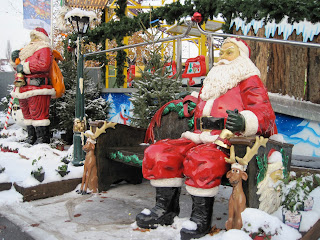 Then there are the Christmas markets, the winter carnivals, the holiday choral concerts and all the other civic festivities. Come to think of it, most of our Christmas traditions in America are nostalgic attempts to evoke a kind of Old European village atmosphere. Whether we live in California or Texas, Mississippi or Maine, we want pine trees, snow and handmade baked goods. In Belgium, those traditions are neither nostalgic nor kitschy... they're just traditional.

So I have the respect, perhaps even reverence, for holiday traditions that only comes from having grown up in a young country that idealizes its European roots. Which is why I'm so very annoyed about a relatively recent addition to the holiday landscape here in Flanders.

I'm talking about the Kerstman. 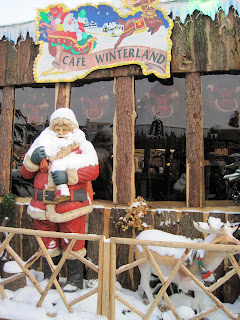 The Kerstman (literally “Christmas man”) looks just like Santa Claus and appears around the holidays in store windows, in advertisements, everywhere Christmas decorations and displays are found. The annual winter carnival in my home city of Hasselt is absolutely lousy with Kerstmannen. He lurks around every corner and stands sentry at every waffle stand and jenever bar. His image is plastered on walls, signs and placemats. He is usually accompanied by reindeer.

But herein lies the rub: For some reason, the Flemish refuse to use Santa's REAL name because that would force them to confront the ugly truth... That Santa Claus is just Sinterklaas in different clothes! Santa Claus, Sinterklaas—even the names sound the same. That's because “Santa Claus” is an Anglicization of “Sinterklaas”, most likely taken from Dutch settlers in nineteenth-century New York (the city formerly known as New Amsterdam). 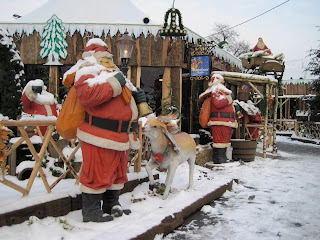 My Flemish husband refuses to concede this obvious fact. He says that Sinterklaas is a real person, a bishop from Turkey (as was the historical Saint Nicholas) whereas Santa Claus is a fictional character. And that Sinterklaas lives in Spain and arrives by steamboat, which (according to him) makes a lot more sense than living at the North Pole and driving a sleigh pulled by flying reindeer. Whatever. I still say that toy-making elves make better companions than Zwarte Piet.

Sadly, we are subjected, every December, to the awful spectacle of Sinterklaas arriving and departing only to be replaced by his fatter, jollier doppelganger, the Kerstman, a few weeks later. It's like having to live in an alternate universe where the same beloved Christmas figure keeps changing clothes and personalities. I wish Santa would just stay on the other side of the Atlantic, or come over here and put a stop to these imposters once and for all. Leave Belgium to Sinterklaas. After all, he's got tradition on his side.


(A version of this post appears on the website for Fans of Flanders, a new English-language TV program aimed at expats living in Belgium. I'm honored to be one of their regular guest bloggers!)
Posted by Unknown at 6:29 AM