History comes to life in Bruges

I've always said that ending up in Belgium is my punishment for complaining about the weather (or lack thereof) in Southern California: one of life's little ironies that seemed funny at first and now just seems cruel and unusual. Let this be a lesson you all: Be careful what you wish for!

On the other hand, there is also a sweet serendipity in my move to Belgium that I only discovered gradually. You see, I adore history and art. The older, the better. I majored in history at university, and then went on to study art history in graduate school. My favorite period is the Middle Ages. But aside from the occasional museum, the only place I could see medieval art and architecture was in books.

It turns out that Belgium is a fantastic place for anyone who loves medieval history. Some of its greatest artistic achievements date to the Middle Ages, and the medieval Flemish cities of Ghent and Bruges were among the richest and most populous in the world. There was a time when Belgium was at the very center of the power struggles that shaped modern Europe.

I never get tired of wandering around the old city centers of Flanders, gawking at the step-gabled houses and Gothic churches. My Belgian friends tend to take these things for granted, having seen them all their lives... but once you've lived in Los Angeles, where an "old" building dates from the 1930's, it seems incredible that structures built seven or eight hundred years ago are still standing--and still being used. 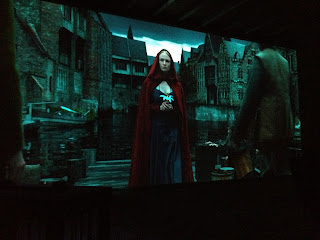 The problem, of course, is that the people who built and lived in all those ancient houses are long gone. The richly-dressed men and women captured in all those fifteenth-century panel paintings: Who were they? What were their lives like? What did they eat? How did they think? Historians have answers to these and many other questions but it still takes a feat of imagination to see them as real, living people.

This weekend, a new attraction opened in Bruges that attempts to bring the medieval history of Flanders to life for the ordinary visitor. Historium combines walk-through environments with a story told through narration and film in order to immerse the viewer in fifteenth-century Bruges. Special effects like fake snow, the scent of burning wood and wind add to the experience. 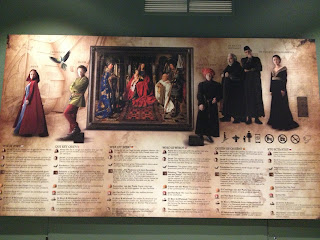 On an ordinary day in 1435, the painter Jan Van Eyck is working on a commission from a church official, a Madonna and Child with saints and a portrait of the donor. (The actual painting hangs in the Groeninge Museum.) His assistant, Jacob, has been sent to the harbor to meet the young lady who will pose for the Madonna, and to retrieve an exotic green parrot who figures in the painting as well. But the girl and the parrot escape and Jacob must try to find them...

Upon entering the attraction, you are given an audio guide which provides the narration and dialogue in your chosen language (seven are offered). In the first room, a darkened set simulates the waterfront in Bruges and a short film plays on the large video screen. Here you meet Jacob, the girl and the parrot as the story begins. 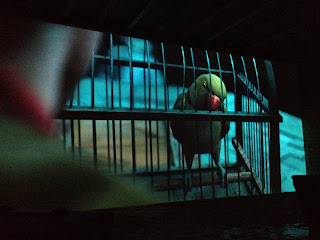 When the scene ends, you are directed to the next room, where you find yourself standing in the entrance to Van Eyck's studio. A life-sized, animatronic Canon Van der Paele snores in the corner as the scene plays out on a screen framed in a doorway, creating the effect of watching the action unfold in the next room. This was my favorite room, in that it successfully integrated the physical environment with the story and created a believable illusion. 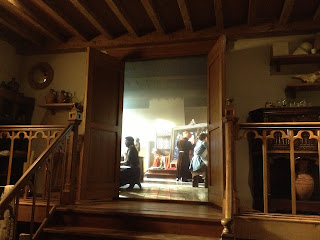 Worst of all, midway through you must exit "medieval Bruges" and climb an ordinary, modern staircase to get to the second floor, where the story continues. This completely ruins the mood and reminds you that you're actually  in the 21st century, wearing headphones and watching a fictional story. 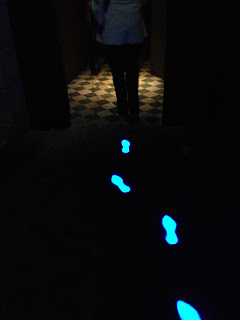 There were other things that bothered me: The English-language audio script didn't sync up with the actors' speech, and the scenes often had a stilted feel to them, as if the characters themselves couldn't hear each other very well or didn't know their lines. The video in one of the rooms was jerky and kept freezing, so I hope they were able to fix those kind of technical issues.

My main complaint, though, is that the outdoor scenes all seemed to take place at night, on streets and squares that were deserted, aside from the main characters. The creators claim that they hoped to bring the fifteenth century to life, but the Bruges they depicted seems curiously dead. I wanted to see the frenzy of commercial activity at the harbor, the foreign merchants and their ships, the people of all walks of life who populated one of Europe's biggest and richest cities.

I also wish they'd depicted more recognizable and real settings. The highlight for me was the last scene where the parrot flies through the Waterhalle, which for 500 years occupied the very spot on the Markt where Historium now stands. Nearly 100 meters long, it straddled the canal (also long gone) so that boats could unload their wares inside, under its vast roof. The 3D depiction is based on historical and archaeological documentation.

Despite my quibbles over some of the details, Historium definitely fills a need for the visitor to Bruges: It attempts to show the real history of the city in living color, making the past vividly present instead of an abstraction best left to the scholars. It's all too easy to see the medieval streets of Bruges as a sort of Disney-esque fantasyland of Ye Old Europe where tourists can buy chocolate and lace doilies made in China... Instead of the enduring traces of a once-thriving and dynamic metropolis. 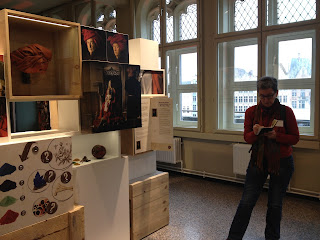 Upon exiting the attraction, another room resembling a traditional museum exhibit gives more explanation about the people and settings depicted in the story. From there you pass through the Duvelorium, an ultra-modern and stylish bar sponsored by the Belgian brewer Duvel Moortgat. Downstairs, a gift shop and a chocolate shop are open to the public without ticket purchase. There's also a new tourist information office for the city of Bruges housed in the same building.
Posted by Unknown at 11:07 AM