Today is a rare summer day that actually feels like summer, with clear skies and temperatures heading upwards of 30°C. (For the record, I consider June to be one of the summer months, along with July and August, whereas here in Belgium summer doesn't officially begin until June 21.) After the miserably cold and rainy spring, I'm starved for sun and warmth, so I'm suddenly feeling a bit giddy—as well as a bit stressed.

The stress comes from the knowledge that this summery weather will soon be replaced, once again, by clouds and rain. MUST TAKE ADVANTAGE OF THE NICE WEATHER WHILE IT LASTS!!! Quick, let's drive to the coast and jump in the ocean! Or round up some friends and try to find a café that still has a free table outside! Or, better yet, let's fire up the grill and throw a barbecue!

Belgians LOVE to barbecue. It combines some of their favorite things: getting together with friends and family, eating lots of meat, drinking, and spending time outdoors. As soon as the weather permits, everyone's weekends are occupied with either hosting or attending various barbecues, which can range from casual, simple affairs or full-blown, catered extravaganzas. 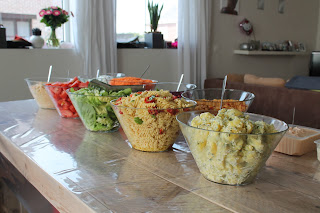 We recently attended a family barbecue that fell into the latter category. A traiteur (butcher) was hired to supply the food for about 25 adults and a bunch of kids. He showed up with his grill and was soon stoking the coals while his wife laid out the salads and side dishes. There was potato salad and cole slaw, sliced tomatoes, lettuce, carrots, pasta salad, cucumber salad and rice, along with big bowls of mayonnaise-based sauces. (And, of course, bread.)

Here in Belgium, mayonnaise--plain or in its many flavored varieties--is the main condiment for both meat and vegetables. Salad dressing as we know it (Italian, ranch, blue cheese, etc.) is a rarity. And BBQ sauce? That staple of every American barbecue, in all its glorious forms, whether spicy, sweet, smoky, or hotter-n-hell—is completely unknown. Imagine that! All those Belgian barbecues with no BBQ sauce... Kinda makes you sad, doesn't it?

My husband's favorite BBQ condiment is something called "cocktail sauce," which is a mixture of mayonnaise and ketchup. Where I come from, that's called "Thousand Island dressing" and it's used on salads. To me, "cocktail sauce" is a spicy dipping sauce for seafood made from ketchup and horseradish. But I digress... 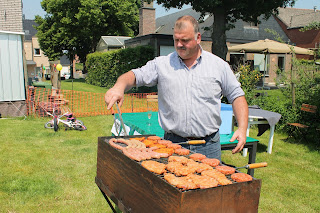 At our family BBQ, the grill man was soon churning out platter after platter of meat. No hot dogs or beef burgers—Oh no. But we had (pork-based) hamburger patties and big juicy bratwursts. We had marinated pork chops and thick slabs of bacon. We had pork skewers and chicken skewers. We had skinny sausages called chipolatas and spicy merguez. The meat just kept coming, and we just kept eating. A Belgian BBQ is first and foremost about the meat. Mostly chicken, pork and sausage, but sometimes beef as well.

The good news is, you don't have to hire a caterer or spend time prepping lots of food if you want to have a barbecue. The supermarkets are well-stocked with ready-to-cook barbecue meat, ranging from pre-marinated ribs to ready-made skewers of meat and veggies. All you have to do is pick up a variety of grill-ready meats, some pre-made potato or pasta salad, some charcoal, and you're all set.

In fact, you can probably forget about the salad, as long as you have meat and bread. According to my husband, the other essentials for a classic Belgian BBQ besides meat and bread are sliced tomatoes and canned peaches. Just don't forget the drinks. And the mayonnaise!

(A version of this post appears on the website of Fans of Flanders, an English-language show aimed at expats in Belgium. I'm honored to be one of their regular guest bloggers!)
Posted by Unknown at 11:49 AM