It's asparagus season in Belgium, which means that the markets (both supermarkets and outdoor markets) are overflowing with piles of white asparagus. In Flemish, it's also known as wit goud or “white gold,” because it's expensive and coveted.

Where I come from, I'd only seen white asparagus in glass jars. Fresh asparagus was always green, and in California it's available year-round. (Here, you can find green asparagus but it doesn't inspire the fervent devotion that the white variety enjoys. The white stuff is actually the same plant, but cultivated underground so it doesn't turn green.) White asparagus is available in different sizes ranging from pencil-thin to great, thick stalks several centimeters in diameter. The thicker stalks have to be peeled before cooking, leaving just the tender, inner flesh. White asparagus is prized for its delicate flavor, considered sweeter then regular asparagus. It's usually boiled and served with a sauce, although it also turns up in soups and other dishes.

Many Belgian restaurants feature special asparagus menus during asparagus season, giving the true aficionado the chance to eat appetizers, main dishes and even desserts made with the beloved stuff. I recently ordered steamed cod served with asparagus and sea vegetables off the asparagus menu at a local brasserie. 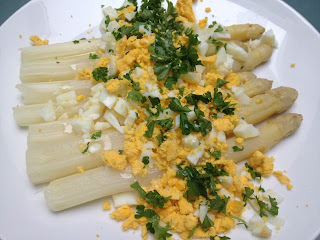 My favorite way to eat this springtime treat is also one of the simplest: Asperges vlaamse wijze or asperges flamande. “Flemish-style asparagus” is just peeled and cooked asparagus spears topped with diced hard-boiled egg, clarified butter and fresh parsley. This classic dish is easy to find in Belgian restaurants this time of year, but it's also easy to make at home.

Belgians don't benefit from the warm, sunny growing climate of California, so the regular diet is heavy on potatoes, leeks, cabbages and carrots—what are usually considered “winter vegetables.” So perhaps that's why the annual appearance of white asparagus creates such excitement. It's only available for a short time, and then it's back to potatoes and cabbage. Until next spring.