Today I want to talk about something near and dear to every Belgian's heart (at least in Flanders... I don't know if it's the same in Wallonia). Something that is essential to the Flemish character, something ingrained in the Flemish consciousness and necessary to every Flemish person's well-being.

I'm not talking about family, or cycling, or even beer. No, I'm talking about sandwiches.
The Flemish love sandwiches. A friend of mine (who's not Flemish) says that they're sandwich-obsessed. She may have a point. They sure do eat a lot of them.

At this point, I have to clarify my use of the word “sandwich.” Where I come from, a sandwich is any hand-held food item involving two pieces of bread with something in between. It could be a BLT, egg salad on sourdough, a turkey club, peanut butter and jelly on whole wheat, a Reuben, an Italian sub, or any variation of bread+not bread+bread you can imagine.

Here in Flanders, there are different names for different kinds of sandwiches. First of all, a “sandwich” in Flemish parlance isn't a sandwich at all. It's a soft, oval-shaped roll, kind of like a dinner roll, that's often used to make a kind of mini-sandwich. But to be perfectly clear, it's the bread itself that's called a sandwich. Confusing, isn't it? 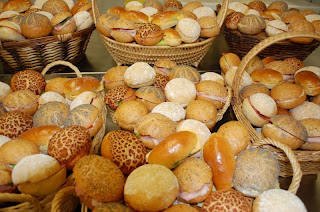 Then you have the most basic type of sandwich: two slices of bread with something in between. This is what's known around here as a boterham. As the name suggests, it's usually made with butter (never mayonnaise!) and a thin slice of deli meat, like ham or chicken. Or maybe cheese. But a boterham has just one ingredient other than bread and butter! You do not put lettuce, tomatoes, pickles or anything else on your boterham.

I remember when I first came to Belgium, I thought that a boterham was a sad and boring excuse for a sandwich. It's so thin! And it's mostly bread! It's a sign of how long I've been here that I now view them as perfectly normal. My husband eats a boterham every day for breakfast, and another two for lunch. If I had to eat a boterham twice a day every day, I'd probably slit my wrists.

If you want a sandwich with more than one ingredient, what you want is a broodje. Now, a broodje (literally “little bread”) is technically a small baguette (or stokbrood in Dutch), so to be correct, what you want is a belegde broodje, or “filled little bread.” The most basic kind is a smos, which is shorthand for lettuce, tomato, cucumber, sliced egg and mayonnaise. I prefer a smos-kaas-hesp, which is a smos with ham and cheese.

But there are many other kinds of broodjes, and this is the kind of sandwich you will most likely purchase at a café or lunch counter. It's the standard quick meal when you're out and about, and they're usually fresh and quite good. 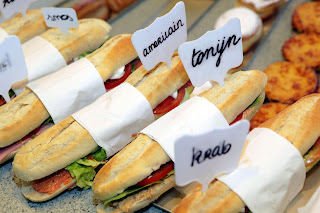 However, I must warn you about one type of sandwich filling you might encounter in a broodje. It's something called Américain, which is horribly misleading and actually rather mean. As an American, I object strenuously to this misnomer, which is used to describe raw ground beef.First of all, no American is going to eat raw ground beef. Ewww! And second of all... why call it something that makes me think it's from America? Which it certainly is not.

Besides boterhammen and broodjes, you also have the many variations on grilled cheese sandwiches, which are Belgian menu staples. There's the croque monsieur (grilled ham and cheese), croque madame (with an egg on top), croque Hawaii (pineapple ring on top) and croque Bolognaise (covered with—you guessed it—Bolognaise sauce). There are others besides.

Anyway, you get the idea. There are lots of sandwiches being eaten in Flanders. I know I've eaten more sandwiches since coming to Belgium than I had eaten back in the U.S. since leaving elementary school. More than fries, more than mussels or waffles, I have to say that the sandwich is really the national dish.

(A version of this post appears on the website for Fans of Flanders, an English-language TV program aimed at expats living in Belgium. I'm honored to be one of their regular guest bloggers!)
Posted by Unknown at 9:17 AM