Of course we have smokers in America--I believe the U.S. is the biggest manufacturer of cigarettes in the world, and we pretty much invented the whole idea that smoking is cool. (Thanks, Madison Avenue!) But in the past few decades, the government has done a good job of convincing Americans that smoking is dangerous to your health and the health of those around you, not to mention a vile and noxious habit.

Also, I lived in California, that epicenter of health-consciousness, for over ten years before coming to Belgium. Not only has smoking been banned in restaurants and bars in California since 1995, but most municipalities in Southern California also ban smoking in parks, on beaches, near the entrances to public buildings, and in outdoor dining areas. Basically, it's almost impossible to smoke a cigarette in public in Los Angeles.

None of my friends in L.A. smoked. So I was able to live a virtually smoke-free existence before coming to Belgium.

One of the things I admire about Belgium is that people here have a very tolerant attitude towards others. Belgians, for the most part, believe in "live-and-let-live." That means that Belgium was one of the first countries to allow gay marriage. Possession of a small amount of marijuana (for personal use) is legal here. Unfortunately, smoking is still seen largely as a individual right, so anti-smoking legislation has lagged behind the U.S. 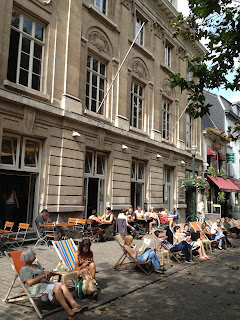 Smoking in bars and nightclubs was only banned as of July 1, 2011. Smoking in workplaces (including restaurants) has been illegal since 2006. In general, smoking rates for Belgium are slightly higher than for the U.S. (closer to 1 in 4 adults in Belgium, as opposed to 1 in 5 Americans, smoke). But smoking rates in the U.S. have been declining over the past decade, whereas for Belgium they've stayed the same.

It probably seems like more people smoke here because they're much more visible, especially compared to California. (It makes more sense to compare countries in Europe to states in America, especially when talking about things that are legislated at a state level.) Even if you could find a public place in California to smoke, the shame would probably prevent you from lighting up.

I just can't get used to the fact that it's still okay to smoke on the outdoor patios of restaurants and bars here. Sometimes it's a narrow distinction between "inside" and "outside" when the patio area is enclosed on all sides. There's nothing (in my mind) worse than sitting down to enjoy a drink or a meal on a beautiful summer day, only to have someone at the next table light up and start blowing smoke in my direction.

So that's one thing that isn't so great about Belgium. I say that as a non-smoker; if you're a nicotine addict--sorry, I mean, smoker--then by all means, come to Belgium! But do it soon. I'm guessing it's only a matter of time before Belgium (and the rest of Europe) starts to ban smoking in other public areas, just like California.

Meanwhile, I console myself over the end of summer with the thought that in winter, when all drinking and dining takes place indoors, I'll be spared having to smell and taste cigarettes with my food.