I like to browse used book stores whenever possible (who doesn't, right?) and these days I always look for old English-language travel guides on Belgium and Flanders. The other day I came across an absolute gem: a yellowed paperback with the gushing title A Masterpiece Called Belgium. 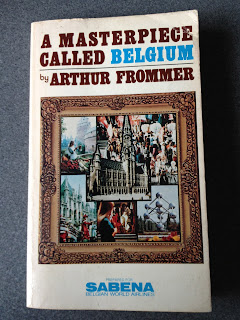 It was written by that scion of the American travel industry, Arthur Frommer (of Frommer's guidebooks and Arthur Frommer's Budget Travel magazine) in 1984, under the auspices of Sabena Belgian World Airlines. I'd never heard of Sabena Belgian World Airlines, but that's not surprising since the list of airlines that no longer exist is long and storied. (According to Wikipedia, Sabena was the Belgian national airline founded in 1923. It went bankrupt in 2001 and eventually became Brussels Airlines.)

I have to show you the back of the book, with a quote from the author. It just tickles me that Frommer was saying the same thing 28 years ago that I've been telling people ever since I moved here. Here's what he says:

"In the course of two decades spent traveling in Europe, it slowly dawned on me that the sights and pleasures of Belgium were second to none. Yet far too many tourists, unfamiliar with the great ages of Belgium's glory, were streaming instead to less attractive destinations simply because they were more easily understood. I resolved then to do a book-length guide to Belgium, combining the practical and the general, all in support of a message I often feel like shouting: In culture and cuisine, in art, in history and in people, Belgium is a Masterpiece!" 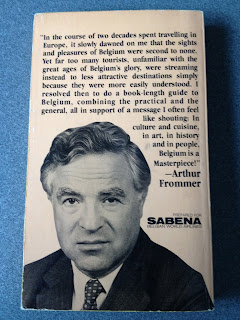 I do think Belgium is becoming better known as a travel destination, in part because of technologies like the Internet, and because the tourist industry is finally catching on to Belgium's charms. But still, the fact remains that most Americans bypass Belgium in favor of more accessible countries in Europe like France, England, Germany and Italy. Belgium continues to be Europe's best-kept travel secret.

I'm looking forward to reading this book and finding out what ol' Arthur has to say about Belgium. It's too bad the book is out of print. I have a feeling it wasn't widely read when it was published--was it even available in bookstores, or only through the airline?--but I think the English-speaking world could benefit from hearing his message now. "Belgium is a Masterpiece!"

[Update: Pauline Frommer, Arthur Frommer's daughter, assures me that the book was sold in bookstores and went through several printings at the time. You can follow her on Twitter at @PaulineFrommer.]