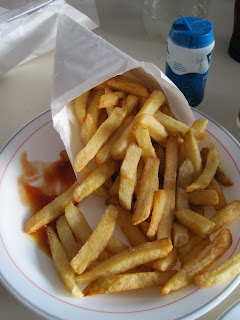 Everyone is familiar with the ubiquitous French fry, right? But not everyone knows that the French fry is actually Belgian. The story goes that American G.I.s first encountered fried strips of potato in Belgium during WWI and called them "French" because the Belgians spoke French.

This story is neat because it both explains the misnomer and shows Americans to be ignorant about European geography and national identity!

So anyway, not only did the Belgians invent French fries but they're something of a national obsession. Belgians eat a lot of fries. They're typically eaten with mayonnaise, but other sauces are available, or you can get them topped with goulash (a sweet-and-sour meat stew) or a kind of brown gravy. I have yet to see a Belgian put ketchup on their fries. 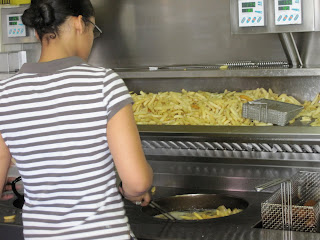 You can get your frietjes at a frituur, which is an independently owned snack bar that serves all kinds of fried foods in addition to fries, or at a frietkot, which I have yet to see but I'm told is an old-fashioned, typically Belgian fry shack. Fries are cooked to order and served in a paper cone. 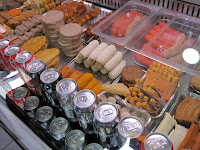 The "meat snacks" (for want of a better term) at this frituur are beautifully displayed in a glass case. Most of them are a complete mystery to me. I've been slowly trying to figure out what everything is, either first-hand by eating one, or by asking friends. My favorite so far (in terms of admiration, not consumption) is the kipcorn, which is a log of processed chicken covered in what looks like corn flakes.

A word of warning: Do not, under any circumstances, order a hamburger at a frituur. You'll get something that resembles a burger in that it will be a patty on a bun, but the patty is not made from ground beef. I'm not sure what it's made out of... in taste and texture, it resembles an English banger. And it won't be cooked on a grill; everything is tossed into the deep fryer.

If you want to know more about Belgian fries, check out this website.
Posted by Diana Goodwin at 6:59 AM