Exploring the Congo in Tervuren


If I seem a bit preoccupied with history, well... it's probably because I am. I was a history major in college, and I'm fascinated with the past. Strangely enough, I was never that interested in American history, but focused my studies on medieval Europe. Which makes living in Belgium an absolute joy, what with all that was going on here in the Middle Ages. 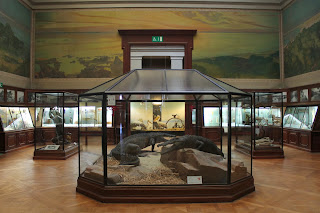 Maybe it's because I didn't grow up here, but I find myself getting more and more interested in the Belgium's modern history too. I grew up hearing about George Washington, the Revolutionary War, the Declaration of Independence, blah blah blah, year after year. It was all so boring... And yet I knew nothing about the history of Belgium when I arrived here three years ago! Nothing at all! It's all so new and exciting and surprising.

Take, for instance, Belgium's involvement in the Congo. Sure, I'd heard of Joseph Conrad's famous novel, Heart of Darkness (which I confess I've never read), and I even knew that it was the inspiration for Francis Ford Coppola's 1979 film Apocalypse Now (which I've never seen). But I did NOT know that the novel was set in the Belgian Congo, or that it was inspired by Conrad's own experience working for a Belgian trading company in the Congo. 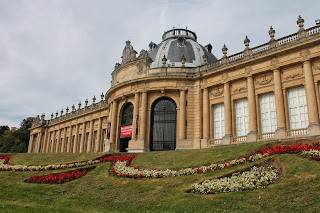 In fact, I didn't know anything at all about the history of the Congo before I came to Belgium. Which is one of the reasons I was so eager to visit the Royal Museum for Central Africa in Tervuren before it closes for renovations at the end of November. So a couple of weeks ago, an American friend and I made the trip out to Tervuren, on the outskirts of Brussels.

The building itself is a grand, Neoclassical palace, built to showcase the natural resources of the Congo to the rest of the world when it was still under Belgian rule. Stepping through the front doors, we found ourselves in a huge, marble-clad entry hall surmounted by a tall dome. There are gilt sculptures of idealized Europeans bringing charity and civilization to poor African children. It's not just a museum of African art and artifacts, but of colonialism itself. 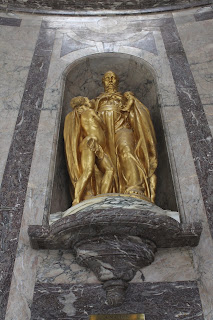 Some of the exhibit halls look as though they haven't changed since the last museum renovation in the 1950's. Other rooms still have their original painted murals and wooden cases from 1910. Even the organization and display of the collections is like something out of the last century, with shelves of specimen jars and stuffed animals posed in “lifelike” scenarios. It's incredible that such an important institution has managed to fall so far behind current museum standards.

I can't help but wonder if the decades of neglect had something to do with Belgium's unwillingness to take a good, long look at its colonial legacy in the Congo. It seems to me (as an outsider) that the history of the Congo is something that Belgium is doing its best to forget. In any case, I haven't seen or heard much about it since I've been here. I've even heard a couple of Belgians say something to the effect of, “Well, we don't have the problem with race/a history of slavery like you do in America.” 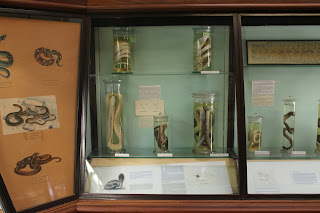 I hope that the renovation of the Africa Museum means that the Belgian government is ready to take on the issue of the Congo, and that the reopened museum will be a place where Belgians and foreigners alike can come to terms with what happened there under Belgian rule. I look forward to returning in three years and learning more about central Africa... but I do hope they leave those beautiful murals and at least some of the creepy specimen jars.

(A version of this post appears on the website of Fans of Flanders, an English-language TV show about expat life in Dutch-speaking Belgium.)
Posted by Unknown at 11:00 AM