Going abroad... to go to the beach

Last weekend, my husband and I decided, on the spur of the moment, to ditch our plans for Saturday and drive to the beach instead. The day was already shaping up to be warm and sunny, and after the long, cold spring we were more than ready for some summer weather. Our friends were already on their way, and the thought of them lying on the sand soaking up the rays without us, or worse yet—enjoying a cold sangria on the beach without us—was too much to bear. We loaded up the car with towels, sunscreen and the dog, and we hit the road.

The radio was full of dire warnings about the terrible traffic on major highways heading towards the Belgian coast. Traffic jams going to and from the beach towns are inevitable on summer weekends, especially when the weather is good. Personally, I have no desire to sit in traffic for 3-4 hours, even if there's an ocean view and a sea breeze at the end of it. What makes this prospect even less appealing is the knowledge that you'll end up at the Belgian coast.

Belgium has just 30 kilometers of coastline fronting the North Sea. The towns along the coast—Nieuwpoort, Koksijde, Oostende, Blankenberge—are historic beach resorts with lovely city centers, nice restaurants, museums and casinos. The beaches themselves are beautiful, with wide expanses of white sand and panoramic ocean views... except they are backed by row after row of high-rise hotels and apartment blocks. The Belgian coast is one of the worst examples of real estate development unfettered by government regulation, and of natural beauty spoiled by human intervention. 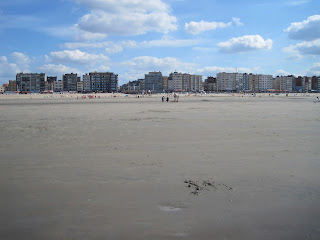 We avoided the traffic jams and the depressing sight of all those concrete towers by heading further east, towards the coastal area of the Netherlands called Zeeland (literally “Sea-land”). Zeeland, unlike the Belgian coast, is completely devoid of high rises, big hotels or concrete apartment buildings. The dunes are intact and the natural beauty is unspoiled. The beaches are much less crowded, too.

We went to a town called Renesse, which sits on an island created by estuaries of the North Sea. We parked at a big, free parking lot in the city center, a kilometer or so from the ocean, and boarded the free shuttle bus to the beach. The bus dropped us off at the bottom of a footpath that led over the dunes directly to the public beach. To either side of the path, just past the dunes, were two restaurants with big outdoor seating areas overlooking the ocean. Everything was so convenient and so well-organized, it was like being at an expensive resort. 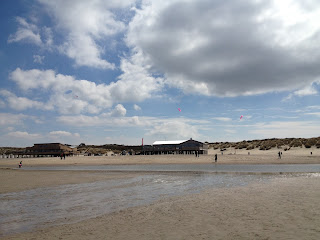 I asked my husband later, on the way home, why more Belgians don't go to Zeeland instead of the Belgian coast. He said, “Because it's foreign.” After all, the Netherlands is another country—albeit one with a common language and similar culture to Belgium! Apparently most Belgians would rather put up with horrible traffic, crowded beaches and ugly views if it means they can stay in Belgium. Personally, I just don't get it.

Maybe that's because I'm already a foreigner here, so going to the Netherlands doesn't seem any more foreign to me. Then again, traveling to a “foreign” country to go to the beach seems rather exciting to me! Even if it's not Spain, or the Bahamas. All I know is, I much prefer the Dutch coast to the Belgian one, and will continue to head there when the sun shines and the temperature rises.