The squirrel and the acorn

It's been way too long since I wrote about my adventures with the Dutch language. I've now gotten to a point in my language acquisition process where I understand most of what people are saying (in everyday conversation) even though the ability to express myself in Dutch continues to lag behind. This strange tongue, which sounded so alien to me three years ago, is actually starting to make sense!

Still, there are some Dutch words that are just too funny. The word for "sample" never fails to amuse; just the other day we were watching a detective show in English, and the Dutch subtitles said "Neem het monster naar het labo." I giggled and said, "Take the monster to the lab!" Hee hee. Get it? Take the MONSTER to the lab!

Another favorite is ijsberen. Literally, this verb means "to ice-bear." An ijsbeer is a polar bear, and if you've ever seen a polar bear in captivity, you know that they tend to pace back and forth. So ijsberen is pacing, which is very evocative if a bit sad.

I was confused the first time I heard someone talking about an "acorn" in Dutch. The word for squirrel is eekhoorn, which is pronounced exactly like "acorn" in English. Thus, the Dutch word for the animal sounds like the English word for the animal's favorite food. I wonder how that happened, from an etymological point of view...

It gets better: The word for porcini mushrooms is eekhoorntjesbrood. Literally translated, this means "little squirrels' bread." How cute is that?!!! It sounds like something straight out of Beatrix Potter. I suggest we English speakers stop using the Italian name at once and start calling this delicious fungus "squirrel bread." 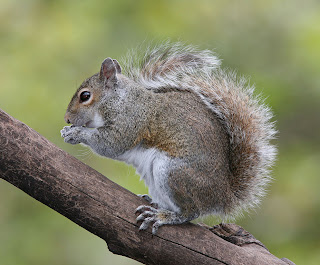 I'm often struck by similarities between Dutch and English words, especially when the meanings are related but different. Take, for instance, the word stof in Dutch. It can mean either "dust" or "fabric" or even "matter" in the sense of "substance" or "material." I have no doubt that this is where our word "stuff," with all its many uses and connotations, comes from.

Even more interesting is the Dutch word for hydrogen: waterstof. The stuff of water. Oxygen is zuurstof, or literally "acid stuff," which makes sense when you learn that scientists originally thought that oxygen was a necessary component of acids. Carbon is koolstof, literally "coal stuff." Sometimes I find Dutch to be wonderfully descriptive.

Dutch is also much simpler than English. The same word, zuur,  means both "sour" and "acid." Logical, right? In English, we have two words that mean nearly the same thing: sour and tart. I've come to realize that in cases such as this, one word is often related to Dutch/German while the other comes from Latin/Romance languages. "Sour" is related to zuur while "tart" comes from Old French.

For someone like me who loves language and words, this stuff is fascinating. (See what I did there?) Stay tuned for more geeky word fun!

Email ThisBlogThis!Share to TwitterShare to FacebookShare to Pinterest
Labels: language