A medieval abbey in Brussels


Yesterday I went to Brussels to visit Bruxella 1238, a museum with the remains of a Franciscan abbey buried under street level in the middle of the city. It's only open once a month (on the first Wednesday) with a guided tour, and there's only one tour in English. I'd known about it since last year but this was the first time I'd finally been free on the right day and made the effort to go.

I'd invited a friend from my Dutch class to join me and we took the train together from Hasselt in the morning. We bought our tour tickets at the Maison du Roi in the Grand'Place, then walked over to the museum entrance next to the Bourse. There were four other people on the English tour besides us. The site is small so a small group is ideal.

The guide gave us a lot of historical background on the early development and medieval history of Brussels and led us through the archaeological site along permanent walkways. The walkways and stairs took us over the ruins, but where we had to cross the walls of the abbey, we actually had to climb over the walls themselves, stepping on top of the stones. 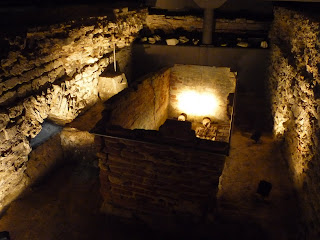 The site, underneath and alongside the Bourse, was discovered during roadwork in 1988. After they'd excavated the foundations of the medieval abbey, it was decided to make it a permanent museum rather than cover it up again. It's now covered by a glass roof and you can look down into the site from the street, but most people walk by without noticing it.

You have to use your imagination to picture what the abbey might have looked like in the Middle Ages, since we can only see the foundations and subterranean levels of the buildings now. Several skeletons--monks who were buried beneath the abbey--give the site a funereal air and bear witness to the real people who lived and died there.

Afterwards, we returned to the Maison du Roi, where our tour tickets were also good for admission to the Museum of the City of Brussels. On the first floor there's a scale model of Brussels in the thirteenth century that shows the abbey in relation to the rest of the medieval cityscape. On the ground floor, you can see sculptural fragments from some medieval buildings, although not from the abbey.

As our guide explained, Brussels had its origins in the Middle Ages. There was no settlement, nothing but swampy marshland and meandering tendrils of the River Senne, before the 11th century and the first city walls were built in the 13th century. The abbey founded in 1238, therefore, is one of the oldest remnants of the city's past. Definitely worth taking a look if you're in Brussels on the first Wednesday of the month, or happen to be walking along the north side of the Bourse and remember to look down.