A nation of gin drinkers

This past weekend was the Jenever Feest in Hasselt. I had been looking forward to this event for a while since it's my boyfriend's favorite festival of the year and he'd mentioned it several times. Hasselt is known for its jenever; it's even home to the National Jenever Museum. And during the Jenever Feest the city turns into one big party with jenever being served and drunk in every street.

Jenever, as I learned during my first week here, is a kind of gin native to the Netherlands and Belgium. (Jeneverbes is Dutch for juniper berry, which is what's used to flavor gin.) I could tell you more about what it is, exactly, and how it's made, except that I wasn't that interested in those sections of the Jenever Museum and was more focused on getting to the jenever tasting at the end.

My boyfriend prefers the old-style jenever (oude jenever or graanjenever), which is clear and very strong. It's always sipped, and savored, from a small glass--no ice and no mixers. I like a good gin-and-tonic as much as the next girl, but I can't imagine drinking gin straight.

Luckily for me, there are all kinds of sweet, flavored jenevers too. These fall into two main categories: the cream jenevers and the fruit jenevers. I like both, but I'm partial to the chocolate (which falls into the cream category) and the berry flavor. 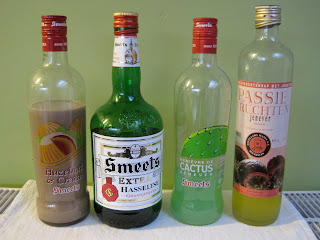 I decided to look in our liquor cabinet and see what kinds of jenever we have in the house for the purposes of illustration. Sure enough, there's a bottle of the classic old-style jenever by Smeets, which is a distillery based in Hasselt, plus some flavored jenevers. Cactus is apparently one of the more popular flavors, and we've got some hazelnut and passionfruit too.

I took the opportunity to sample several different kinds of jenever at the festival: fig, blood orange, berry, lemon, vanilla and speculaas. I also saw lychee jenever for the first time and had to try it, despite the fact that it was bright pink. My boyfriend stuck to the old-style jenever, with the end result that he got drunk twice as fast as the rest of us, since it has twice the alcohol content as the flavored ones.
Posted by Diana Goodwin at 9:28 AM