A carnival in every town

Yesterday was the last day of kermis in the city where I live (Hasselt). It started the weekend before with a spectacular fireworks display on Saturday night and lasted nine days. Supposedly it's the biggest one in Belgium. 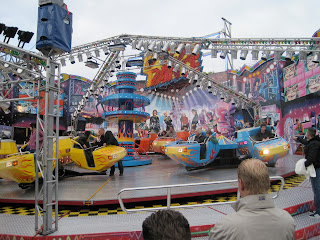 What's a kermis? We Americans know it as a traveling carnival. Living in mostly big cities and university towns across the U.S., I'd never actually experienced one. It was something mythical and legendary, like barn-raising and church socials--a spectacle familiar to the American national consciousness but rarely seen.

Here in Belgium, kermis is a familiar and regular occurrence. Every town, no matter how small or large, has one. Hasselt's kermis easily covers several football fields, encompassing dozens of rides, food booths and games. I went to one earlier in the year that took up one block in the middle of the village and had maybe 10 attractions. 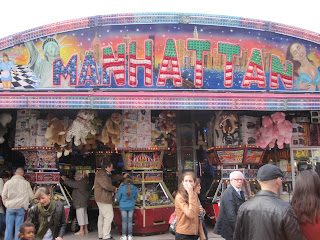 The rides are familiar to anyone who's ever been to a carnival: carousels and bumper cars and those things that fling you up in the air and spin you around like crazy. Me, I loved seeing all the kermis food, which was new and exotic: smouteballen, which are balls of scalding hot fried dough sprinkled with powdered sugar; chocolate- and candy- covered fruit, including pineapple and grapes; karakollen, which are snails; and of course fries, always fries. 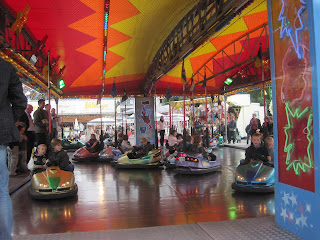 Even more amazing to me were the mobile bars, which I'm pretty sure are not a feature of American carnivals. Some served beer, since Belgians always have to have their beer, but others featured cocktails and I saw at least one full bar. Each bar had a seating area with café tables and chairs, but you could also take your beer or cocktail and walk around.

The wonderful thing about kermis is that it's a civic event. Everyone turns out for it, young and old, teenagers and parents with small children and seniors alike. Whole families stroll along, two or three generations enjoying the sights and sharing the fun, not to mention some fantastically unhealthy food, together. 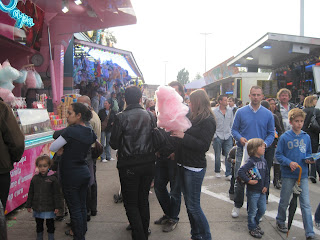 Posted by Diana Goodwin at 9:25 AM