Chocolate. It's what's for breakfast.

Belgium is known for its chocolate, right? I mean, no one's surprised to hear that the chocolate here is really good, or that people eat a lot of it. But maybe you didn't know how it's eaten much of the time.

That's right. Breakfast. We Americans tend to think of chocolate as a dessert, or maybe a snack. It's not generally considered a major food group or the main component of a meal. I had no idea how limiting this thinking was until I moved here!

For instance, I always thought that chocolate cereal was for kids. Sure, adults can eat Cocoa Puffs, but you do so knowing that you're eating something created for and marketed to children. And that your mother would not approve.

So imagine my surprise--nay, delight--when I saw the cereal aisle of the grocery store and learned that fully half of them contained chocolate, and not just the ones meant for kids! Not only that, but most come in two varieties, milk and dark chocolate! 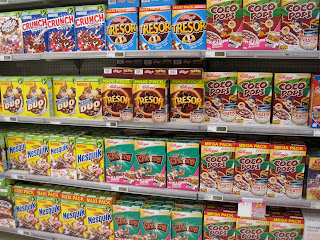 If you live in the States, you should know that you're being deprived of the opportunity to eat chocolate corn flakes. From Kellogg's! Even the American brands of cereal have chocolate versions here. Chocolate Special K! Yeah, the diet cereal. It comes in chocolate flavor. 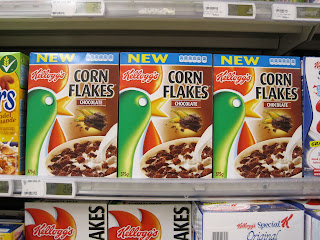 Posted by Diana Goodwin at 6:05 AM